It is in response to Michelle Barnes’ April/Poetry Month Ditty of the Month Club (DMC) challenge, that I created two “echo-based” acrostic poems.

The first echo photo-poem  (a combo acrostic-haiku), posted last week.  In that first one, the echo was aural; this time the echo is visual…Here’s how the second poem evolved.

With “Poem in Your Pocket Day” (PIYPD) imminent (April 21st this year), my thoughts reverted to last year’s event and to a particular first grader who kept a copy of her favorite poem in her pocket well past PIYPD.

“I love my pocket poem,” she proudly announced in the library one day. “I know it by heart.”

Then pulling the copy of the poem from her pocket (for moral support, or back-up, I suppose), but without reading from it, she recited “by heart”:

“I have a little shadow that goes in and out with me,

And what can be the use of him is more than I can see.

He is very, very like me from the heels up to the head;

And I see him jump before me, when I jump into my bed.”

(The remainder of Robert Lewis Stevenson’s My Shadow can be accessed here.)

That child’s high-spirited recitation has stuck in my mind, emerging as the inspiration-genesis for echo poem number two, in which the “echo” is a visual one.

My intent was to create a light-hearted poem, a la Stevenson’s, in which the echo, the shadow, was the child’s visual-projection playmate.

That was my intention…

However, what got projected was more than just the physical shadow. What got projected, as well, as the poem went on, was my deep-seated emotional shadows about having been a relatively playmate-deprived only child…And then, having found the sophisticated (un-childlike) shadow photo used in the photo-poem below, the poem took on an adult life-perspective of its own, with projected “playmate” becoming “companion.”

Here, then, in the context of the adult/”heavy” dawn photo, is the second “echo-inspired” (rather morose, actually) acrostic poem. 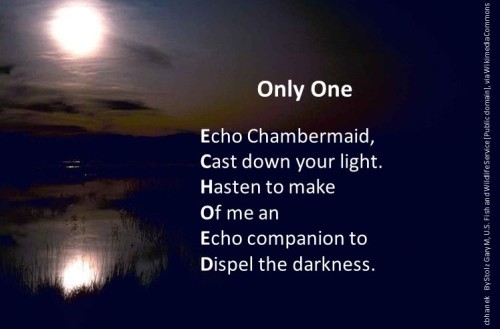 Many thanks to Michelle for another invigorating DMC challenge.

And thank you, too, to the PF community for any comments, including suggestions for improvements, you might generously share in response to either/both echo photo-poems.

(My retrospective wonderings concerning this second echo-poem include these two: might/“should” I have capped the initial “c” in “companion,” and might/”should” I have referred to “my” darkness, rather than “the” darkness?)

BTW, I never was a shadow connoisseur as a child (hmmm….perhaps if I had been, I might have felt less lonely!), though I did enjoy creating shadow puppets before falling asleep now and then. Now, as an adult, I really do get a great kick out of seeing myself reflected in the shadow that my car, with me in the driver’s seat, casts–straight ahead of me–at a certain time of the day and year (when that is, I really can’t recall/tell you for sure, but I believe it is Metro NY Fall mornings).

Am wondering…Did you have a childhood shadow playmate/buddy?  (Such a childhood friend couldn’t really be classified as an invisible friend, could it? …And do shadow friends, do you think, match the gender of the shadow-maker? Or can the shadow-maker decide the echo-friend’s gender? …In that regard, I half-expected the first grader to change Stevenson’s “him/he” to “her/she.”)

To all those who take time to read this post:

Anticipatory Happy Poem in Your Pocket Day for next Thursday!