Although I had planned on sharing more “Earthy,” natural Haiku poems this day, after two false starts, inspiration (unexpectedly) intervened….

But first, some background…

No matter. A challenge is a challenge, and so in response to Michelle Barnes’ DMC challenge, a reverso poem is what I set out to accomplish! With this post, I hope it’s a no-frills, economy version reverso poem–after two false starts with other intended stories —that I have “finally” created.

(BTW, if it makes the four-line reverso more substantive, “Meow! Meow!” can be considered the first and last lines of the poem, extending the line count to six:). 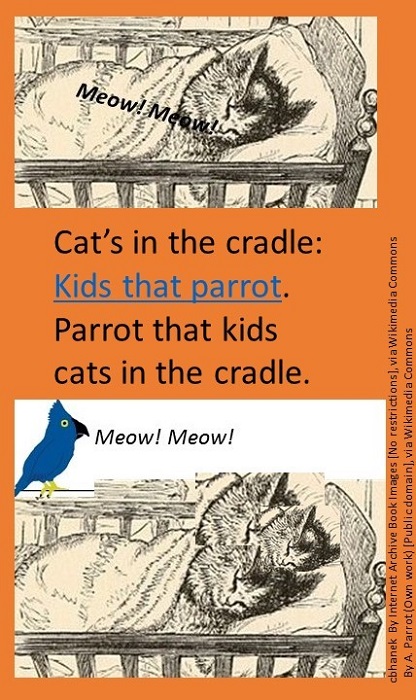 Although my intention was to have the second line hyperlink to the song which inspired the reverso poem, once the photo-poem became a jpeg, the hyperlink no longer works.

For the allusion inherent in that line, please watch/listen: “Cat’s in the Cradle” by Harry Chapin.

The video piqued my interest in Chapin’s wife because the opening words seem to be taken from the midst of an interview in which she described her connection with the song.

If you find yourself equally curious to know more about her relationship with this hallmark Chapin song, you might enjoy reading the fourteenth question asked by an interviewer: SongFacts interview .

Since (as I understand it from the time when the song first published), the “cat’s in the cradle”that Harry Chapin sang about refers to the child’s string game, I thought I’d conclude with an illustration, perhaps as a memory jogger to a childhood pastime that I suspect cannot compete with today’s totally different set of digital diversions.

BTW, I prefer to think of the physical cat in the physical cradle as pictured within the photo-poem–as a moral allegory; seeing the baby copy-cat, imitating his father’s behavior. That’s what I love about lyrics; like other kinds of poems, they are open to so many different kinds of visual and linguistic interpretations.

Because this song has been attributed with being the catalyst (no pun intended) that reversed many untoward familial relationships, highlighting it in a reverso poem seems an especially appropriate format.

Thank you for sharing your remembrances of the song and/or string games. (And, of course, I welcome criticisms and suggestions for improving the reverso. Thank you!)

Like Loading...
This entry was posted in Inspiration and tagged Ditty of Month (DOM), Poetry, Poetry Friday, Reverso. Bookmark the permalink.